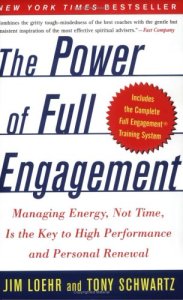 The Power of Full Engagement: Managing energy, not time, is the key to high performance and personal renewal (by Jim Loehr and Tony Schwartz) really excited me when I first read it, about seven months ago. I read it again recently and it inspired me all over again. The premise is in the title – we should be focused on managing our energy rather than our time if we want to live life fully.

Since getting glandular fever in my early twenties, I’ve struggled with energy. My main attempt to fix this has been to cut more and more stuff out of my life in order to rest – stuff like socialising, exercise, and staying up late. This book changed the way I approached this issue, opening my eyes to the other things that drain my energy like how I manage my emotions, the way I think, and whether I’m living by my values.

What did I learn and how did it change things for me?

There are four sources of energy in a human being – physical, emotional, mental and spiritual – and you need to manage them all

I finally get the whole personal values thing, and I know what mine are