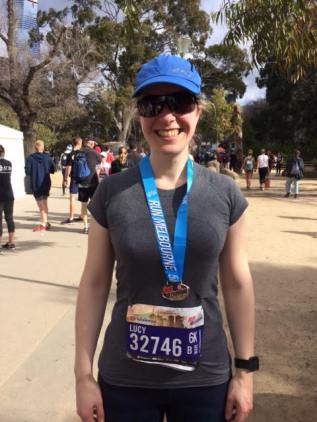 What a beginners’ running course showed me about the value of not going it alone, the unhelpful stories I tell myself, and the importance of imperfection.

I’ve had a hazy goal of becoming a ‘runner’ for a few years now. The main reason is to be able to exercise anywhere. There’s also that niggling feeling that I should be able to run long distances in preparation for the inevitable post-apocalyptic zombie-ridden world we will all soon find ourselves in. It was either more running, or less TV. And I love TV too much.

I’ve tried various things including the couch to 5K app but they never stuck. Then I read the book Born to Run – the one about running, not the Bruce Springsteen memoir (but that is also excellent) – and it was the most inspirational book ever. By the end of it, I felt like I was an ultramarathon runner who just hadn’t started running yet. Not only did it make it seem like I could be a runner, but that it would be easy. But there seemed to be a lot of technique stuff going on, so I decided to sign up to a running class for beginners.

Ten weeks on, last weekend I ran five kilometres without stopping – for the first time in my life.

So, what have I learnt?

It helps to have a proper coach and program

The mental impact is massive

Running with other people is the BEST