The earliest dream I can remember is from when I was six or seven. In my dream, I’m singing solo in a bar, with a jazz band backing me. I sing into a microphone to an unseen audience.

This week I have realised that dream, having shown my cabaret Cutting Loose at The Butterfly Club. It’s taken me 25+ years, but I’ve written an hour-long solo show full of original comedic songs, with plenty of jokes in between. It’s about being a people-pleaser, breaking free from a lifetime of rule following, and being a ‘good’ feminist. 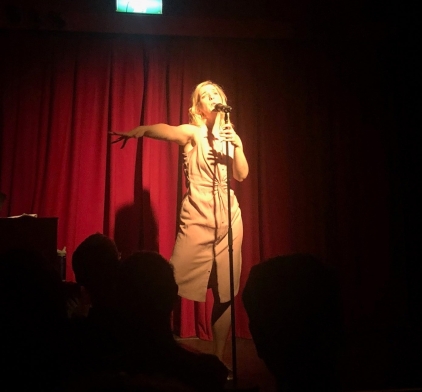 Singing my heart out in Cutting Loose

For six years I’ve done improvised comedy with other people. This is my first written show and my first solo show, and it has been a crazy learning adventure. I have some of the best days of my life working on songs and lyrics and photo shoots. I’ve also been absolutely terrified – if there had been a big red button to get out of it no questions asked, I would have hit it on many occasions.

What have I learnt? A few things.

I had no choice but to do it. Everyone tells me I’m brave for doing it, for putting myself out there. To be honest, it wasn’t really a choice. I couldn’t keep ignoring the calling that hit me anytime I saw another person sing their own funny songs on stage. Now that I have performed it, I have put something out there that makes the universe different – a tiny difference, perhaps, but a difference nonetheless. From then on, I will always be able to say, ‘I’ve done my own show’.

Having the right team is crucial. As much as I call it a solo show, I have not done it alone. I have an amazing Director/Dramaturg in Fiona Scott-Norman, and with her we have assembled a team including Rainer Pollard as Musical Director and Eliza Grundy as Choreographer. Outside of this, I have had other amazing people help with photography and design, concept ideas, PR advice, social media management, voice coaching, and vocal physiotherapy. All of this combines to take the overall product up an uncountable number of notches. Perhaps I could have done it on my own, but it would have been a thousand times harder, and not the best I could have done. I doubt I would have gone through with it.

I developed a creative process and habit. I have never been good at sitting down and being creative. I could do one session, maybe two, and then I’d never revisit that piece of writing, or that illustration. In writing this cabaret, it finally worked. I was able to build up a creative process that became a habit. Perhaps it was because I had hit on a type of writing that inspires me. Throughout my day, I took note of the things that I said to friends that made them laugh, or the stories I told. I literally wrote them in a Notes folder on my phone. Then next time I sat down at my desk, I took out that idea and started working with it. If I had no inspiration, I would journal (using the prompts from my Steal Like an Artist Journal) and after 15 minutes I had almost always hit on something that excited me and that turned into either a song idea or a story idea. Regardless of how I got the inspiration, if it was a story I would free write, and if it was a song, a tune would appear in my head that I would play with. My thesaurus and my rhyming dictionary were key tools. When I had a specific song idea that I wanted to create, I listened to other songs of that genre. For my song Shapeshifter I listened to all the Bond movie themes, as well as other songs listed on the internet as potential bond songs, like Back to Black and Snake-eater. I generated tonnes of material that I then worked with further with my director and musical director.

I couldn’t avoid the overall theme I was trying to avoid. At my first meeting with my director she said, ‘It sounds like feminism is a theme’ and I said, ‘I am too scared to write a show about feminism’. I didn’t want to get it wrong, or make mistakes. I was also worried because I’m white, and there is a lot of talk at the moment about white feminism. Was I doing white feminism? I tried to avoid the topic, but as my writing continued feminism kept coming up, because it’s a theme in my life, and cabarets reflect life and truth. So then it was about my relationship to these topics. I had to tackle head on the fact that I’m white and I’m talking about feminism. In the end, the theme clarified as my fear of what will happen if I get feminism ‘wrong’. 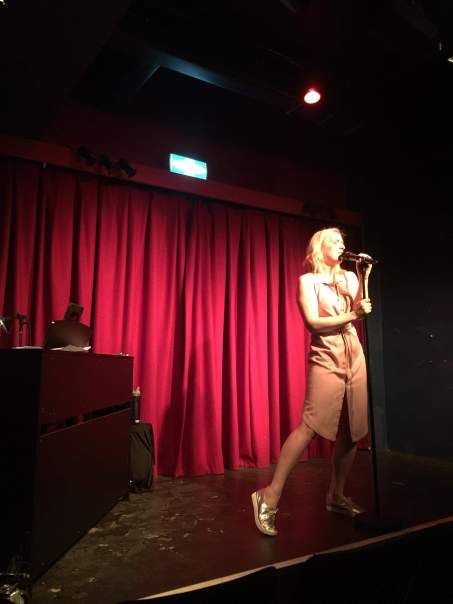 I had to cut back on the social commitments. To write the show, I got up early before work a couple of times a week to write for an hour and a half, and I spent a lot of the weekend on it every week. I also wanted the flexibility to write if I wanted to, and not have to go and do something, so I cut my social life right back. It wasn’t just about the number of hours it took up, it was about the timing. My most productive creative time was in the mornings, so I didn’t make morning social dates. But brunch is the lifeblood of socialising in Melbourne, so my refusal to see anyone before 2PM cut out a lot of options. This was the space I needed to really crack on with something, and those Saturday and Sunday sessions were amazingly fun for me. But I’m looking forward to seeing my friends again!

I’ve finally started to understand how audiences can be different. In improv, people have talked about different types of audiences, or the characteristics of tonight’s audience, but I’ve never really understood it. Now I’m starting to see that sometimes you get an audience that is 100% ready to laugh and have a good time. Other audiences need me to give them permission to laugh. I have started being able to pick the moment in the night when I have gained the audience’s trust. Sometimes it happens later rather than sooner. One night I forgot the lyrics to my third song, and had to restart the song twice. I chatted my way through the restarts, and owned it. Rather than losing the audience, this is what won their trust. This sounds counter-intuitive, but I think it let them know they were in safe hands – I can stuff up the material but we’ll still be OK. Now it’s about finding out how to do that without making an actual mistake!