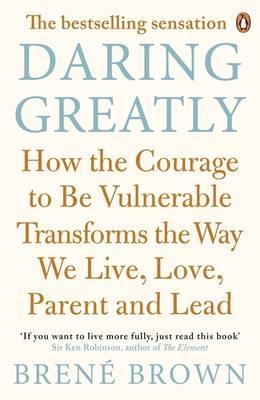 Incredibly insightful as well as highly practical, Daring Greatly: How the courage to be vulnerable transforms the way we live, love, parent and lead by Brené Brown is about the barriers that stop us living the way we want to.

I’ve never thought shame was a big influence or agent in my life. It’s not a word I commonly use. However, Brown says that many of the things that stop us from doing great stuff in life – in our relationships, careers, parenting, and creative lives – are because of shame and fear of vulnerability.

Her main point is that we’re so afraid of shame that we avoid ever being vulnerable. The massive problem being that the only way to get the good things in life is through vulnerability (dammit!).

Brown gives a lot of practical, specific actions you can use to move on from shame and embrace vulnerability. I have started using some and it’s making me a kinder, more emotionally mature person (I hope).

What did I learn and how have I changed my life?

I have been so afraid of failure, vulnerability and shame that it has stopped me from experiencing all life has to offer

Those were the main points for me. But she said so much valuable stuff, here are some other bits that got me: